The Miniscalchi family arrived in Verona, from the Bergamo area during the years of the Visconti domination of the city (1387-1404). The first documented information dates back to 1409 when Veronese citizenship was conferred to Zaninus Mereschalchus, progenitor of the Veronese branch. Originally merchants in search of fortune, they soon succeeded in associating this activity with the management of an increasingly substantial land patrimony which led them, within a generation, to achieve a significant social and political level. In 1425, the family in fact obtained the rank of nobility and was admitted to the noble Council of Verona. The Miniscalchi established their residence in the current Via San Mamaso where they had their noble palace built, now home to the Museum.

The family chapel in the left aisle of the basilica of Santa Anastasia in Verona, commissioned in 1491 by Alvise Miniscalchi and completed only in 1510, is a testament to the economic power quickly acquired by the Miniscalchi.

Numerous and prestigious marriages linked the Miniscalchi to the most important families of the Veronese nobility, and beyond. Of particular importance was the wedding celebrated in 1785 between Marcantonio and Teresa Moscardo - daughter of Princess Alfonsa D'Este - and heir to most of the art, scientific and naturalistic collections gathered by the Veronese scholar Ludovico Moscardo in his own "domestic" museum. Even today parts of these collections, constitute the main nucleus of the collections of the Miniscalchi-Erizzo Museum.

From the marriage between Teresa and Marcantonio was born Luigi, who in 1808, married Marianna Erizzo, the last descendant of the illustrious and powerful Venetian family which also boasted among its members a Doge and a Procurator of San Marco. Princess Erizzo also brought as a dowry some of the most precious objects and paintings of the Museum, such as the splendid Murano glass of the sixteenth and seventeenth centuries, the canvas by Alessandro Longhi depicting the Procurator of San Marco Nicolò Erizzo, and that by Sebastiano Bombelli portraying Nicolò I Erizzo with his children, as well as a large part of the family archive. The nephew Marc 'Antonio obtained consent from the heraldic council to combine the surname of birth with that of the mother and to associate the coats of arms of the two families.

Party in the first silver to the natural uprooted tree trunk, inflamed with red, attached to an intertwined ivy branch. In the second, blue to the gold band: in which there is a hedgehog of natural colour at the top and below an ancient Roman-style knightly belt buckle with the tip at the top.

Crest: helmet surmounted by a lion's paw with a heart. 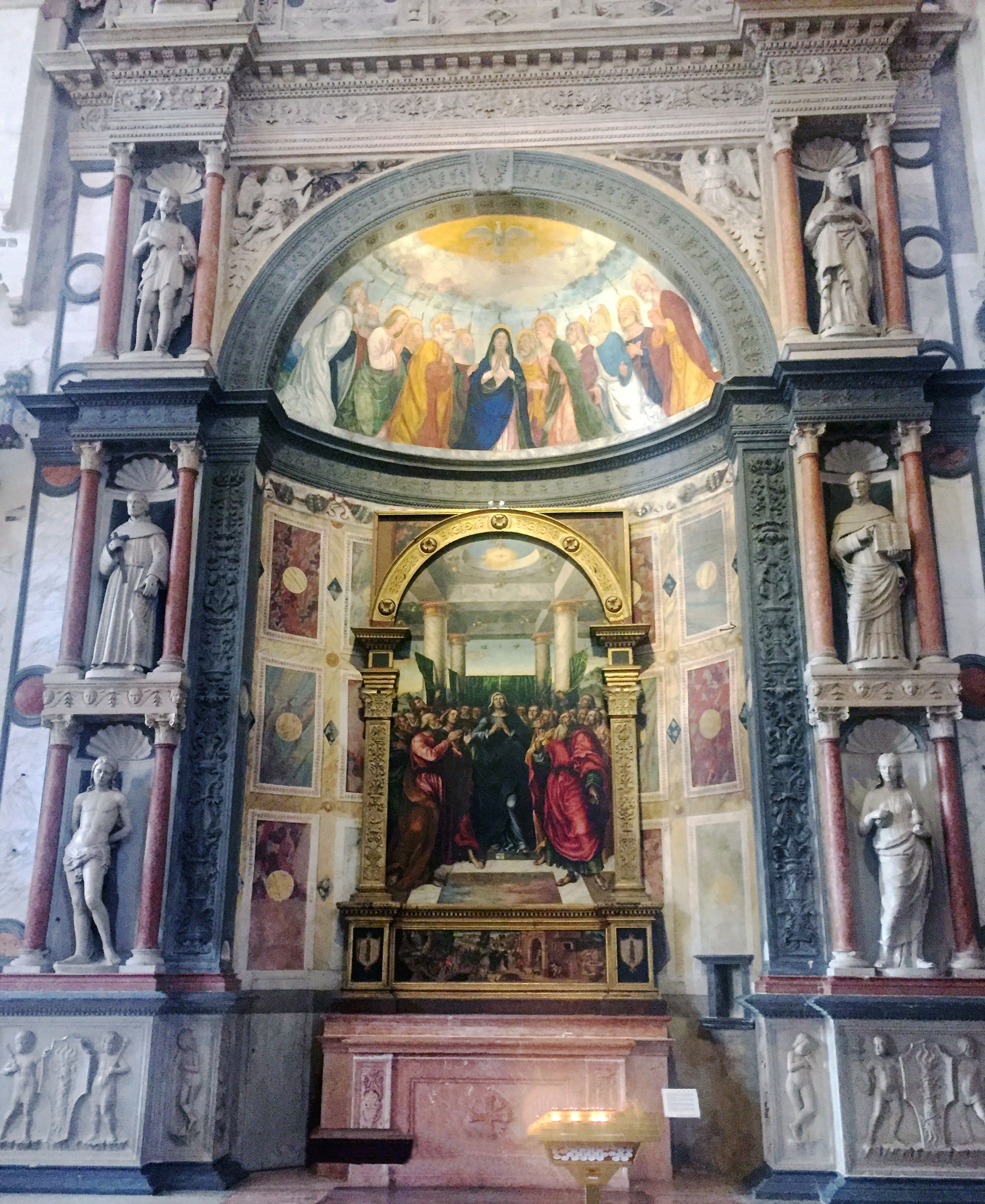 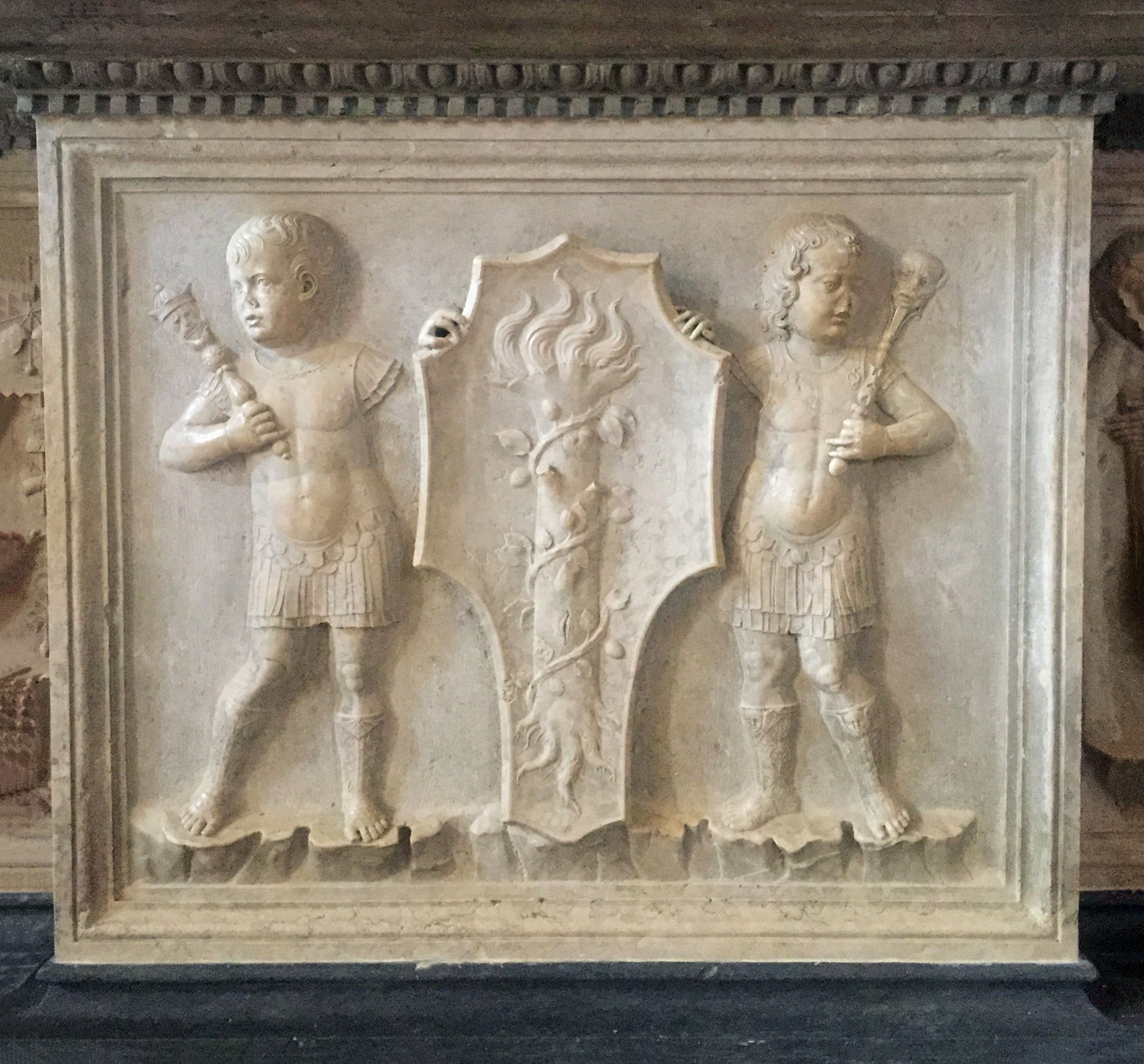 Miniscalchi Chapel - detail of the coat of arms 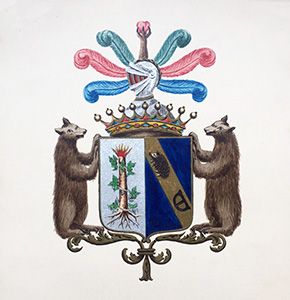 Miniscalchi coat of arms - detail of a doorknob